Are you looking to move to a big city? Or a small town? What about both? Oklahoma City offers the best of both worlds – it’s one of the biggest cities with the heart of a small town. The capital city of Oklahoma State is the second-largest city in the country by total area, excluding the consolidated city counties. And it continues to grow while retaining its Southern close-knit, friendly feel.

In addition, Oklahoma City has an economy supported by diverse industries that offer lucrative opportunities to people of almost all professions. But OKC is not all about work and no play! It offers a ton of attractions, a thriving art culture, and a budding restaurant scene. Its Midwestern central location is great too if you enjoy taking weekend trips to other parts of the United States.

Things to Know about Living in Oklahoma City

The current population of Oklahoma City is estimated to be around 649,021[1]. The downtown revitalization process that began in 2004 has contributed to the city’s growth, which is expected to further develop by leaps and bounds.

The city gives transplants many reasons for relocating here. If you’re considering moving to OKC, here’s a quick guide to Oklahoma City living:

OKC has one of the fastest commute times, averaging at 14.6 minutes[2]. Even traveling from the countryside to downtown can be accomplished well within 20 minutes.

The city’s highly developed and well-maintained infrastructure of roads makes it easy to get around, which is a huge respite as there are limited public transport options like the Metro Transit.

An easy and fast commute is definitely one of the best draws of living in Oklahoma City, especially considering the traffic woes in some of the other large metros in the country.

Housing, which makes up a large chunk of living costs, is quite affordable in Oklahoma City. The median home value is $137,998[3] compared to the overall US home value of $243,225[4]. Plus the city has some of the lowest property taxes in the US, further reducing the cost of buying a house here.

The variety of housing options available in Oklahoma City makes it a homebuyers’ dream. Whether you want to buy a sparkling new apartment or cabin in the city, build a house on vacant land, or buy a ranch in the surrounding areas, OKC has got you covered.

The other living essentials like groceries, utilities, and transportation don’t cost much either. In terms of electricity, Journal Record states that Oklahoma had the lowest retail electricity rates in the country in 2018. Oklahoma City certainly offers more bang for your buck. According to Best Places, Oklahoma City’s cost of living index is 85.4 compared to the national average of 100. So living in Oklahoma is not so bad! 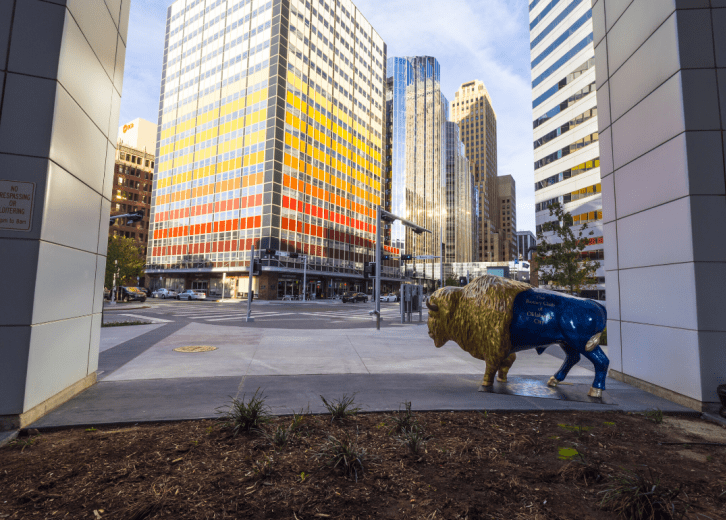 The robust economy of Oklahoma City has the ability to support job seekers in a number of diverse sectors, including biotechnology, aerospace, healthcare, manufacturing, retail, aviation, agriculture, and energy sectors like natural gas, oil, and petroleum.

Oklahoma City is also known for its high median household income – $144,833, which is 191% higher than the state median[6]. Quite expectedly Jetty ranks Oklahoma City as one of the best cities for millennial job seekers thanks to its low costs of living and high wages.

Are you planning on starting your own business or startup? The bustling startup and entrepreneurship scene in the city has picked up the rapid pace with numerous entrepreneurial activities, startup events, entrepreneur MeetUps, incubators, and co-working spaces.

This comes as no surprise as the Arizona State University Center for the Study of Economic Liberty’s recent report ranks OKC as the easiest place in North America to do business[7]. Factors like low taxes, a healthy business environment, and ease of registering property have further contributed to this distinction. It’s also among the top five cities with the youngest entrepreneurs[8].

Yet another perk of living in Oklahoma City for families and young couples with kids is the high quality of education available here. There’s a ton of reputed as well as new, renovated schools to choose from including primary and secondary schools like Edmond, Oakdale, Deer Creek, and many others. The city schools’ high rankings can be credited to a number of factors like teacher-student ratio, student performance, and modernized buildings. 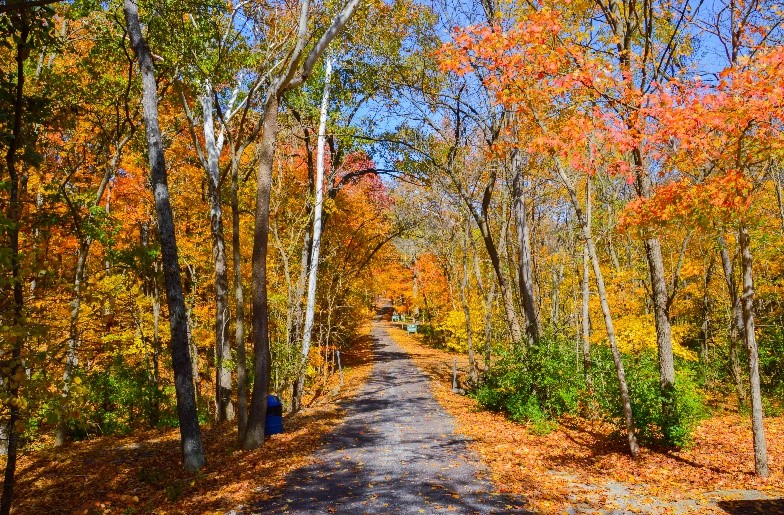 People living in Oklahoma City can enjoy all four seasons: spring, summer, autumn, and winter. During the summer, it’s hot and humid with temperatures reaching a maximum of 102° F[9]. Winters are mild with occasional snowfall, and temperatures rarely fall below 17° F[10]. While there are cloudy skies at times, on most days you’ll be greeted with clear skies and clean air.

But there’s a caveat: the state of Oklahoma is located near the heart of Tornado Alley so it’s naturally prone to tornadoes. The Oklahoma City area experienced destructive tornadoes in 2013, 2016, 2018, and 2019[11]. It’s also prone to Midwestern storms. 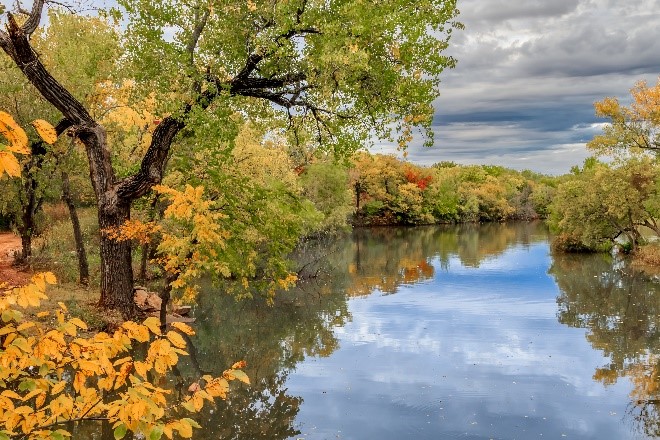 Do you like exercising amidst nature? Then you’ll love living in Oklahoma City! With more than 200 days of sunshine and clean air, Oklahomans naturally want to step out more often, bask in the sun, and breathe in the clean air. The city has more than its fair share of outdoor spots for doing just that! There’s an abundance of trails for hiking, mountain biking, cycling, and running. It also helps that the city promotes outdoor sports and a healthy lifestyle. The Oklahoma City Memorial Marathon is a popular event on a national as well as international scale.

For water sports lovers, the Oklahoma River is a major attraction where people go canoeing and kayaking. Similarly, golfers can choose from a ton of public and private courses. Gardens and parks like the Oklahoma City Zoo and Botanical Garden are some other major attractions. 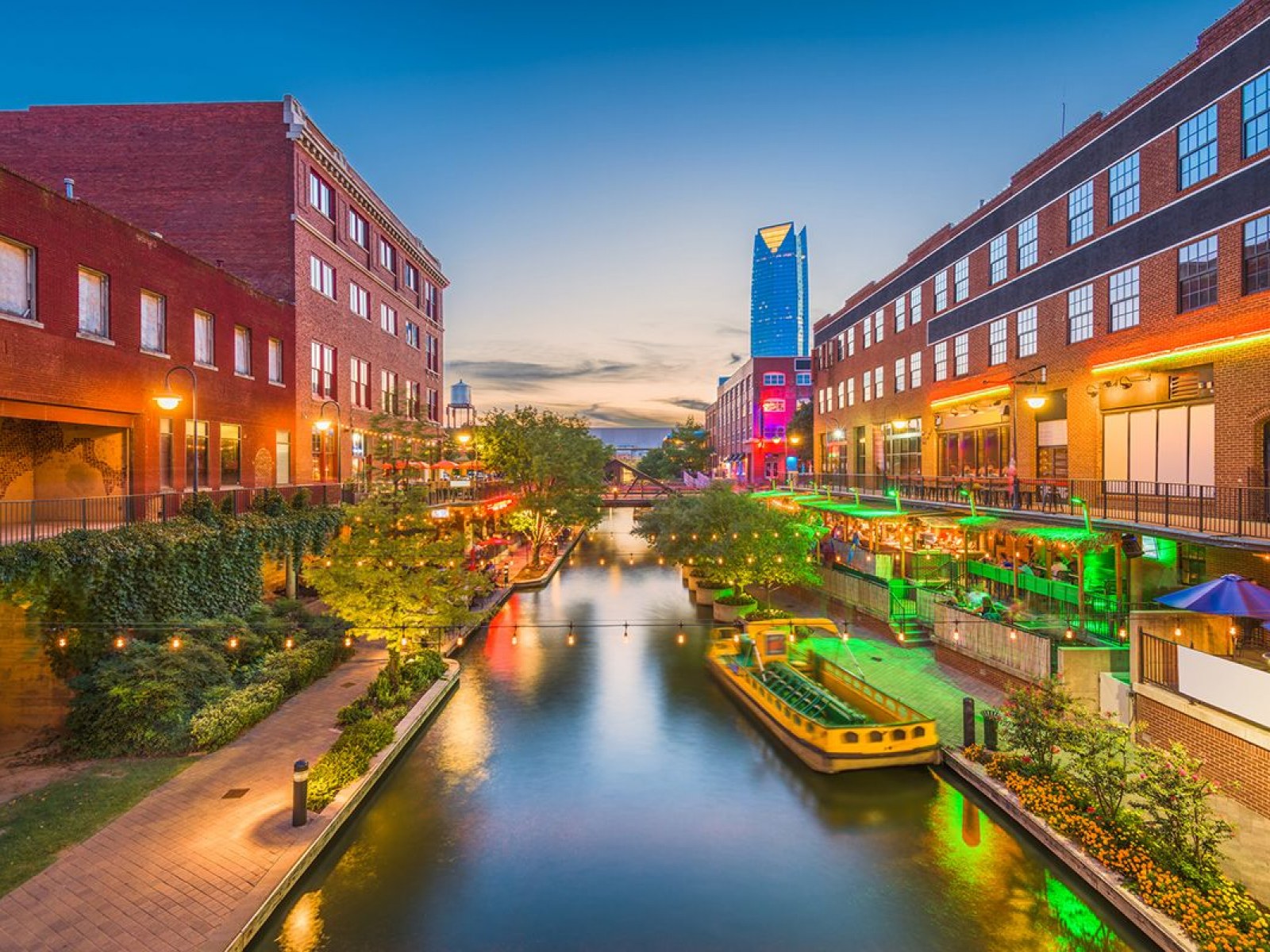 When you’re left famished at the end of a fun-filled day spent exploring the outdoor sports or art exhibits, it’s time to refuel and re-energize at any of the eateries and watering holes. Thankfully, living in Oklahoma City translates into a plethora of entertainment options for everyone, whether you enjoy a nice quiet dinner or a fun night out. There’s a delightful mix of fun eateries, local as well as chain restaurants, clubs, bars, and other venues to choose from.

Some restaurants that feature on the must-try list are – the Mule, which is a hip eatery serving an awesome cocktail menu and sandwiches, Pearl’s Crabtown, which is a seafood restaurant in a lively warehouse setting, and Kitchen No. 324, which is known for its awesome breakfast and brunch menu including mouthwatering pastries and a selection of curated coffees.

There are many more restaurants all of which cannot be listed here but it should suffice to say that OKC has earned a name for its bustling culinary scene that has developed over the last few years partly thanks to its influx of youngsters and families who want to make it home.

But that’s not all! For those of you wanting to add some excitement to your weekends with horse racing and a bit of gambling, there’s Remington Park in the Adventure District to try out.

To get a feel of the thriving arts culture in Oklahoma City, picture this: an eclectic mix of art galleries, stunning world-renowned museums, concert venues, art festivals, film festivals, and incredible orchestras. But words cannot do justice to the stellar arts culture that attracts art lovers from not only the United States but also other corners of the world; it has to be experienced.

And you can experience it at more than a dozen venues and events some of which include the Paseo Arts Festival featuring mainstream and independent films and off-beat exhibits, Oklahoma City Museum of Art that features a collection of long-term and short-term exhibits, Deadcenter Film Festival, Festival of the Arts, Oklahoma City Philharmonic Orchestra at the 2,500-seat Civic Center Music Hall, the Canterbury Choral Society Oklahoma City Ballet, and the National Cowboy & Western Heritage Museum showcasing 28,000 plus art pieces and artifacts.

The Paseo Arts District with over 60 artists and 17 galleries deserve a separate section in and by itself. But in the interest of space, we’ll just say that it’s worth checking out!

Agriculture and farming are highly developed activities in OKC, so your expectation of finding fresh produce is not misplaced at all! You can source a variety of fresh fruits and vegetables at the local Farmers’ Markets and even enjoy food prepared by craftsmen, farmers, and students at the OKC Farmers Market.

No matter how great a city may seem on the outside, if it’s devoid of nice and friendly people, it doesn’t quite meet the mark. But that’s not the case with Oklahoma City. Its people are known for their close-knit Southern charm that instantly puts everyone at ease. These are some of the most welcoming, kindest and friendliest people you’ll ever meet.

One of the few disadvantages of living in Oklahoma City is the high crime rate. It has a crime rate of 50 per one thousand residents and its crime index is 4 with 100 being the safest[12]. If you’re planning on moving to OKC, it’d be best to research the neighborhood before finalizing a home. Some of the safest neighborhoods in the city are Air Depot Boulevard/Se 44th St, Witcher, N Western Ave/W Covell Rd, N Portland Ave/NW 234th St, and Mid-America Christian U/SW 149th St.

We hope our guide helped you make a decision about moving to Oklahoma City. If you think it’s not the right place for you, you can consider moving to other places in Oklahoma. If you’re looking for a state with a low cost of living, great job opportunities, no rush hour traffic and don’t mind a dull landscape, moving to Oklahoma would be a great idea!

Moving anywhere can be challenging and stressful, and not to mention exhausting. Whether you decide to move to Oklahoma City or elsewhere, Cool Box Portable Storage is here to help make your move easy and as stress-free as possible. We provide portable and insulated moving storage containers that are available in three sizes to help match your moving requirements. What’s more, we offer the best pricing options and even meet or beat competitors’ quotes for the same specifications!

Are you moving to Oklahoma? Get a quote from our convenient Oklahoma location: